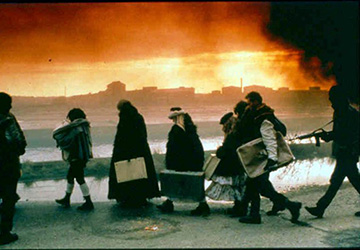 “Surely Derek Jarman’s Last of England is the longest and gloomiest rock video ever made. Its manifold images of annihilation and misery are assembled in free-associating fashion, without any concern for narrative but with the quick, vigorous, flashy pacing that video audiences understand. The energy level of The Last of England is much too high for monotony, but the film’s expressionistic leaps are determinedly obscure. Whatever the reason, there were many walkouts during the film’s New York Film Festival press screening.” Janet Maslin

“A full-throttle state-of-the-nation broadside against Thatcher-era Britain, The Last of England ranks among Jarman’s boldest aesthetic experiments. The film is essentially a dense patchwork of Super-8 footage, transferred to video for editing and processing and then back to 35-millimeter film. Alongside nostalgic home movies mostly shot by Jarman’s father (an air force pilot during World War II) are nightmarish vignettes, set under radioactive skies and amid vistas of post-industrial ruin.” Dennis Lim